Recently I began tuning into Sports radio for my commute into work.   Mike Greenburg and Mike Golic are piped into one of our local stations from 6:00-10:00AM, and I typically catch the 8:00-8:30 segment.  This morning they were waxing not so elegantly about two scandals in the sports world: Bobby Petrino’s affair and attempted cover up as well as Ozzie Guillen’s foot-in-mouth statement concerning Fidel Castro.

There is no question in Greenburg or Golic’s minds that Petrino’s actions are morally reprehensible.  Yet, one of the Mikes brought up the fact that fans in Arizona were holding rallies in support of Petrino.  Mike encouraged his listeners to view the situation from the perspective of these Arkansas fans.  Petrino wins games.  Why should he be held to any higher moral standard than anyone else?  He’s a football coach, not an educator.  Let’s leave these statements stand for a moment as we saunter over to their comments concerning Ozzie Guillen. 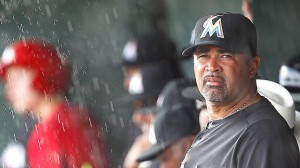 Greeny and Golic left off their conversation concerning Petrino to talk about Guillen.  They provided us with a similar situation in baseball where an individual made comments about Hitler “starting off well” but going a bit too far.  Immediately seeing the inconsistency of holding Guillen to a higher moral standard concerning his comments about Castro, when they just argued that Petrino shouldn’t be held to a higher standard regarding his affair, vehicular accident, and attempt at a cover-up, they claimed that the situation is entirely different.

How are the situations different?  It seems as if both individuals have offended some moral code the public acknowledges.

Mike and Mike believe that the situations are different because Guillen has offended a wider audience.  Ozzie is the manager of a Florida team, a state that has a high concentration of Cubans.  His comments in support of Castro have hurt thousands if not millions (hyperbole much?).  One of the Mikes proceeded to say, “Who has Petrino hurt?”  “Well, his family.  He will have to deal with that.  And those closest to him.  But it’s not like Arizona will have a problem with attendance.”

And after about a half-hour blah blah blah blah blah, we have found the crux of the matter.  Punishment to be doled out to public figures for ethical/moral infractions is, according to Mike and Mike, determined by the wallet.  Petrino wins games and draws a crowd.  Who cares that he has ruined his marriage, destroyed his family, and tried to cover up an accident?  Guillen makes some very unwise comments about a ruthless dictator (to put it mildly).  Many are offended.  Yet, his sentence should be determined on how well he appeases the masses and the impact it will have on the club’s ability to keep its fans.

I guess when you put it that way, the situations are worlds apart.

This entry was posted in Life and tagged Sports. Bookmark the permalink.