SBL Chicago was quite the experience. I was able to go back to the city where it all started. 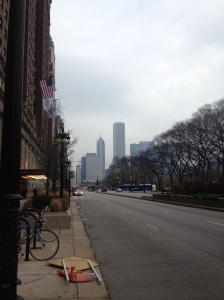 In 2004 I set out from my parent’s home in North Carolina in order to attend Moody Bible Institute. At the time, I wanted to be a youth pastor. I had seen the impact my youth pastor had on me and wanted to impact others for Christ in the same way. As the years went by and my love of the study and need of answers increased, I discovered that there were myriad ways I could impact others for Christ. Eight years later I find that my desire to serve Christ in the ministry and in academia has not slackened. In light of that, I found myself in Chicago once again, this time attending the Society of Biblical Literature.

This year the conference was held in McCormick Place. I think that a more appropriate name for it would have been McCormick Palace. It felt like I walked well over a mile going from the West building to the East.

The center was equipped with a Starbucks, which had a perpetual wait of 30mins, multiple food courts (by my count there were at least three), and a massive exhibit hall filled with books. Here’s a picture of the exhibit hall from the outside. 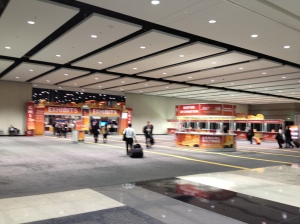 All of this is to say, the whole event was intimidating. The list of presenters in the back of the SBL program was like a mini phonebook. Which presentations do I see? Who do I try to meet? How do I not get lost in a crowd?

SBL is structured around study groups. For instance, there is the International Organization for Septuagint and Cognate Studies, SBL Biblical Greek Language and Linguistics Section, and SBL Book of the Twelve Prophets Section. Within each of these study groups, anywhere from 3-5 presentations are given. For most groups, one session takes place each day of the conference. My advice? If you are interested in the Septuagint, attend all of the sessions. Why? Why would I attend the session “Deuterocanonical Books and Beyond” if I have no interest in the papers presented in that section?

I’m glad you asked. All the heavy hitters, and the not so heavy hitters, who make the Septuagint their life’s work will be in attendance. After the third day of regularly attending meetings on the Septuagint, those individuals caught on that, I, like them, happen to be interested in the Septuagint. This is how I was introduced to Drs. Gentry, Meade, Gallaher Branch, Kreuzer, and others. Here’s how the conversation went, “Hey, I have seen you around and I don’t think we’ve met. I’m Robert Meade, what’s your name and where are you from?”

It takes only one person to speak with you and the rest will come in droves. This is because you are no longer a purveyor. You have become a participant in the conversation.

Second, show up early to each one of the sessions. You may think that lounging around in the common areas is the way to make new friends, but it is not. Everyone is on the move. If you show up early to sessions, pull up a seat, take out a book, and read until the next person walks in, that person will more than likely be one of the presenters. Even though they may have presented a thousand times, they are still nervous. They want to make sure everything is in order, the projector is still there, there is water on the table, etc.

After their paranoia wears off, guess who is patiently minding their own business but eagerly awaiting a conversation? You! And, to inappropriately appropriate the phraseology in Ruth, chance upon chance you are the only person available to the presenter for a conversation in order to ease his or her mind before the session begins.

Third, many of you might have heard that SBL is the conference all the “liberals” attend. ETS is where it’s at. There, we are capable of embracing scholarship and the academic world in a safe environment. True, you won’t see a study group for “Gender, Sexuality, and the Bible Group” or “Queer Studies” at ETS. What you will most likely find, though, is a cult of personality and “sugar-coated exegesis.” When at ETS two years ago, I walked away disappointed. It may have been due to my session selection, but I found most (not all) of the presentations to be stale and lacking. It is not as if the cult of personality is absent at SBL. “Tom Wright,”  “John Dominic Crossan,” and “Bart Ehrman” are still headliners. Yet, it was simply my impression that the overall attitude was to forego these sessions for the business at hand.

Fourth, this point dovetails with the former. When walking into the exhibit hall, I expected to see huge spreads from publishing houses like Zondervan, Baker Books, and IVP. Each of these publishers had extensive exhibits, but they were all relegated to the edges. The center isles had SBL, Brill, T&T Clark, Eerdmans, Westminster John Knox, and the various Bible Societies. While one could argue that this is to be expected due to SBL’s liberal leanings, one cannot argue the fact that SBL, Brill, T&T Clark, et. al. publish the works that have significantly impacted a field of study. These works are typically dissertations, which would otherwise be tucked away in a library never to be read again, but have merited such high regard as to receive publication.

[[Disclaimer: Do realize that I am in no way saying that IVP, Baker Books, and Zondervan are bad houses. I am not saying all that books published by them are of lesser quality. Most of my library is composed of excellent reference works and monographs by these publishers. I am also not saying that attending ETS is fruitless. I am merely speaking in generalizations from my personal impressions]]

Fifth, there is no better way to have a natural conversation with a presenter than to listen attentively and ask insightful questions afterwards. It might surprise you to know that a topic of interest to the person you want to meet happens to be the topic they just spent the last 6 months preparing and 30 minutes delivering. Don’t be bashful, ask away.

Sixth, I have always thought that making and passing out business cards as a student is pretty cheesy. I’m not convinced that isn’t true. Yet, there were a couple of times where an exchange of contact information was necessary and I had no graceful way to say, “Hey, my name is Jacob Cerone, my email address and phone number are…remember me.” I will have to think on this one.

Seventh. If you are still with me, this one might be the most important. Attending SBL is invigorating. New life will be injected into your studies. It is easy to become discouraged when the same conversation takes place at your institution, a conversation you have become weary of. It is easy to become arrogant and jaded when you know all the answers your professor wants. SBL helped put things in perspective.

In the end, SBL Chicago was a lot like College Chicago. In both cases I left my little home in North Carolina only to find that there was a much bigger world out there, one that I can hide from or learn to engage. It is easy to go home in despair, to hide from it all. It is a much harder thing to rely on Christ in order to serve him with excellence in my endeavors.

On a lighter note, SBL Chicago and College Chicago were the same in a few other ways…

Chicago food has and always will be some of the best!

2 Responses to SBL Chicago in Hindsight: A Student’s Perspective