Deuterocanonical Books and Beyond

The third and final meeting of the International Organization fro Septuagint and Cognate Studies was held last Tuesday. The topic of study, as I am sure you have already deduced, was “Deuterocanonical Books and Beyond.”

Robin Gallaher Branch  giving her paper, A Literary Analysis of Selected Secondary Characters in the Books of Judith

Peter Gentry giving his paper, Were the Aristarchian Signs in the Fifth Column of Origen’s Hexapla? 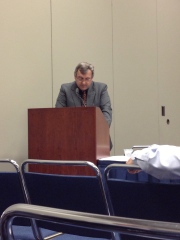 Siegfreid Kreuzer on Old Greek, kaige, and the trifaria varietas – a new perspective on Jerome’s statement.

Talk about a humbling session. The vast amount of knowledge required of Siegfried Kreuzer to discern the rescensional activity of scribes within the LXX and challenge the current consensus that there is a Lucianic rescension and then to relate Jerome’s statement about three forms of the Greek text in a plausible way is mind boggling. I’m still not sure if I understood it all, if any.

Peter Gentry did not cover the material promised. Instead, his presentation focused on the meaning of the antisigma as a notation for textual variants. He intentionally created a cliff hanger so that we would come to next year’s meeting of the IOSCS in Munich. A side note about Dr. Gentry. He has a very dry wit. At first glance you might think otherwise, but he will bust your sides without even cracking a smile.

Robin Gallaher Branch’s discussion on the significance of the secondary characters in Judith was fascinating. She delivered her paper with excitement and enthusiasm, a stark contrast to the dry witty presentation given by Peter Gentry. Dr. Branch’s analysis showed us that the secondary characters, round and flat, allows us to beter see and understand the heroism of Judith. I had the privilege of speaking with her after the session. A nicer person you will not find.