As One Devil to Another: A Review & Contest Winner

Disclosure of Material Connection: I received this book free from the publisher, Tyndale. I was not required to write a positive review. The opinions I have expressed are my own. 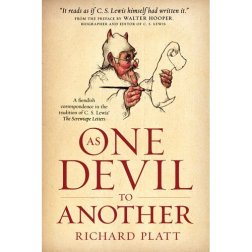 As One Devil to Another is a series of correspondences from Slashreap, a senior-tempter in His Infernal Majesty’s bureaucratic regime, to his nephew Scardagger.  Platt strengthens the ties between his work and Lewis’ Screwtape Letters by establishing familial ties between Slashreap and Screwtape; Slashreap and Screwtape are brothers.  This tie allows Slashreap the ability to draw upon the past failures and blunders of his nephew Wormwood as motivation for Slashreap’s success.

For those who could not get enough of Lewis’ work, As One Devil to Another is a must read.  Walter Hooper, biographer and editor of C.S. Lewis writes, “It reads as if C.S. Lewis himself had written it.”  Though the advertisements on book covers can, at times, be a bit hyperbolic, this one is not.  If you didn’t like Screwtape Letters you will not like Platt’s work.  Platt has attempted a great feat, to adopt the writer’s voice of one of Christianity’s most distinguished writers, and he has done it admirably.

This is not to say that all is well with the book.  At points I felt as if Platt recognized the insurmountable nature of his task and either 1) referenced the spiritual impact and genius Lewis has had on the world in a manner in a manner that jars the reader, or 2) paraphrased large sections of Lewis’ work.  For instance, when referring to the library of the “client’s” aunt, Slashreap writes, “A perusal of her shelves will give you a working knowledge of the formidable creature that has bested you.  Among her special favourites you will find a pestilential writer named Lewis.  Whatever you do, don’t try to remove these volumes. .  I doubt very much you will be able to come near them, as they will sear your flesh beyond recognition, and make you even less useful than you have already been to me and to the cause of Hell” (37).

This is not the only example of where the “third-wall” of the narrative is broken.  When addressing the problem of pain, evil, and suffering in the world (27-34), I was transported from the fictional world Platt established to a lecture I heard in a seminary epistemology class concerning the “free-will defense” against the problem of evil.  Platt’s representation of the position is well articulated, but it seemed out of place in a book composed of informal correspondences between uncle and nephew.

All in all, the book was enjoyable.  Platt aptly handled the current issues of the day: political correctness, homosexuality, television, internet, reality tv, the state of scholarship, etc.  The plot twist at the end was unexpected and delightful.  Platt has done Lewis a great honor with this contribution.

This entry was posted in Book Reviews, Religion. Bookmark the permalink.

1 Response to As One Devil to Another: A Review & Contest Winner