Dr. Keith began with one of the funniest one-liners of the conference. He was commenting on Dr. Robinson great love for the PA and said, “There’s no one that loves adultery like Maurice!” 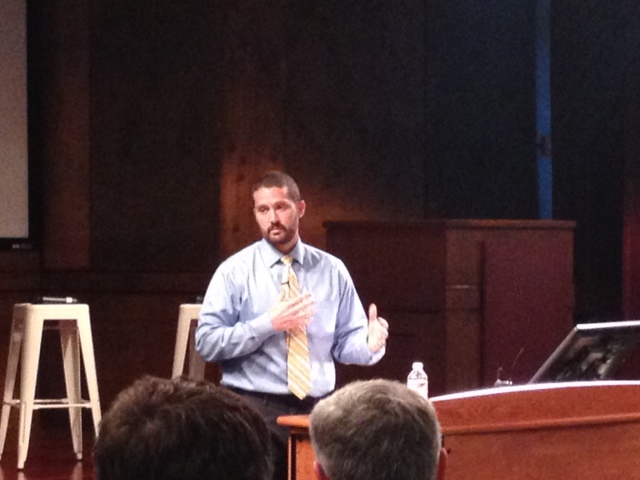 Three things are certain about the PA:

Dr. Keith talks about the linguistic style of the PA. Many have found linguistic reasons to argue for or against the originality of the PA. Some of these arguments have been utilized the affirm its placement in the various Gospels in which it appears.

Keith moves to show that linguistic style can be suggestive of literary origins, but not conclusive. First, the history of research indicates that PA linguistic evidence can be used to support literary associations with Luke, John, etc.

[As an aside, know that you can also view Thomas Hudgins’ live blogging over at thomashudgins.com. He will be able to fill in whatever gaps my blogging might, and surely does, have]

In order to support his contention that linguistic style can only be suggestive of literary origins, Keith argues that there are a number of instances where authors mimic style. The first example Keith uses is the longer ending of Mark. Realizing that this is not the best example for his panelists (hint hint Maurice Robinson who also believes the longer ending of Mark is original), Keith references the NT authors tendency to mimic Septuagintal linguistic style for certain purposes.

What’s the upshot? If authors borrow linguistic stylistic elements from previous texts, then why is it not possible for the author of the PA to adopt the style of the author of John in order to make his text fit nicely within its current context. This contention cuts to the heart of Dr. Punch’s discussion on the contextual similarities between the PA and the surrounding Johannine passages.

This is precisely the question I wanted to pose to Dr. Punch last night. At what point are we able to determine that the similarities are due to the same author versus an astute author or composer who has either found an appropriate placement for the pericope or has authored the pericope specifically to fit within its current context. That is not to say that Dr. Punch’s contention is altogether undone. We must ask the question as to the threshold for the evidence to support original authorship versus prime placement.